Happy Monday Friends!! Can I just say that this pregnancy is kicking my butt!! I am still waiting for my energy to kick in for the second trimester, but it pops in at random times and runs away just as fast. Being that I have been a bit absent lately, I thought I would give you all a little update on our weekend.

We were supposed to attend Alina’s first field trip to the pumpkin patch but it turned out to be cancelled due to all the rain we got at the beginning of our week. Sad day since we were looking forward to it for weeks. I felt terrible for Alina because she was trying to act like it was okay, but in all reality she was so bummed out. To help her feel better we took her to see Smallfoot at the theatre which is adorbs btw, and planned to hit the pumpkin patch over the weekend.

Of course, nothing goes as planned and my poor little honey caught a stomach bug and was tapped out the entire weekend. So needless to say, we were homebodies the entire weekend. Being that we were to horrible about not making it to the pumpkin patch before it closes for the year, I took a trip to a cute little Hispanic store in Los Ranchos to pick us up a few pumpkins to carve.

Can I just say how SHOCKED I was to find out that the pumpkins were literally dirt cheap. I only paid $6 bucks for two quite large pumpkins. One of the many reasons why I absolutely LOVE The Fruit Basket. I mean just look at how cute and authentic it is. 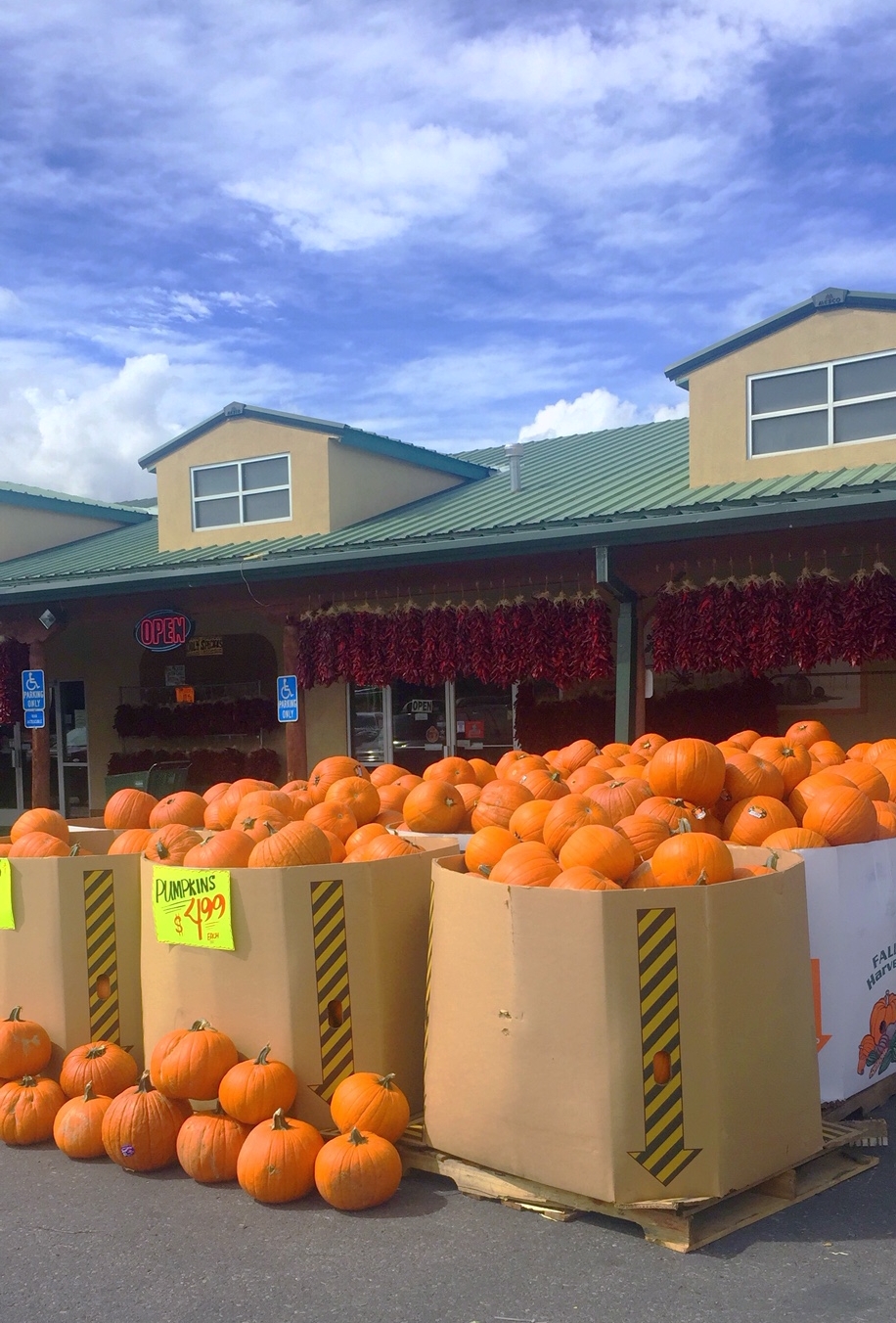 Lina was set on carving a ghost pumpkin and I got the second to carve for myself but my child had other plans for it hah. She decided that since we had two pumpkins, we would carve a ghost and a hello kitty which may I add was ridiculously hard to carve! Here are the finished products of our pumpkins which I will say came out pretty good. 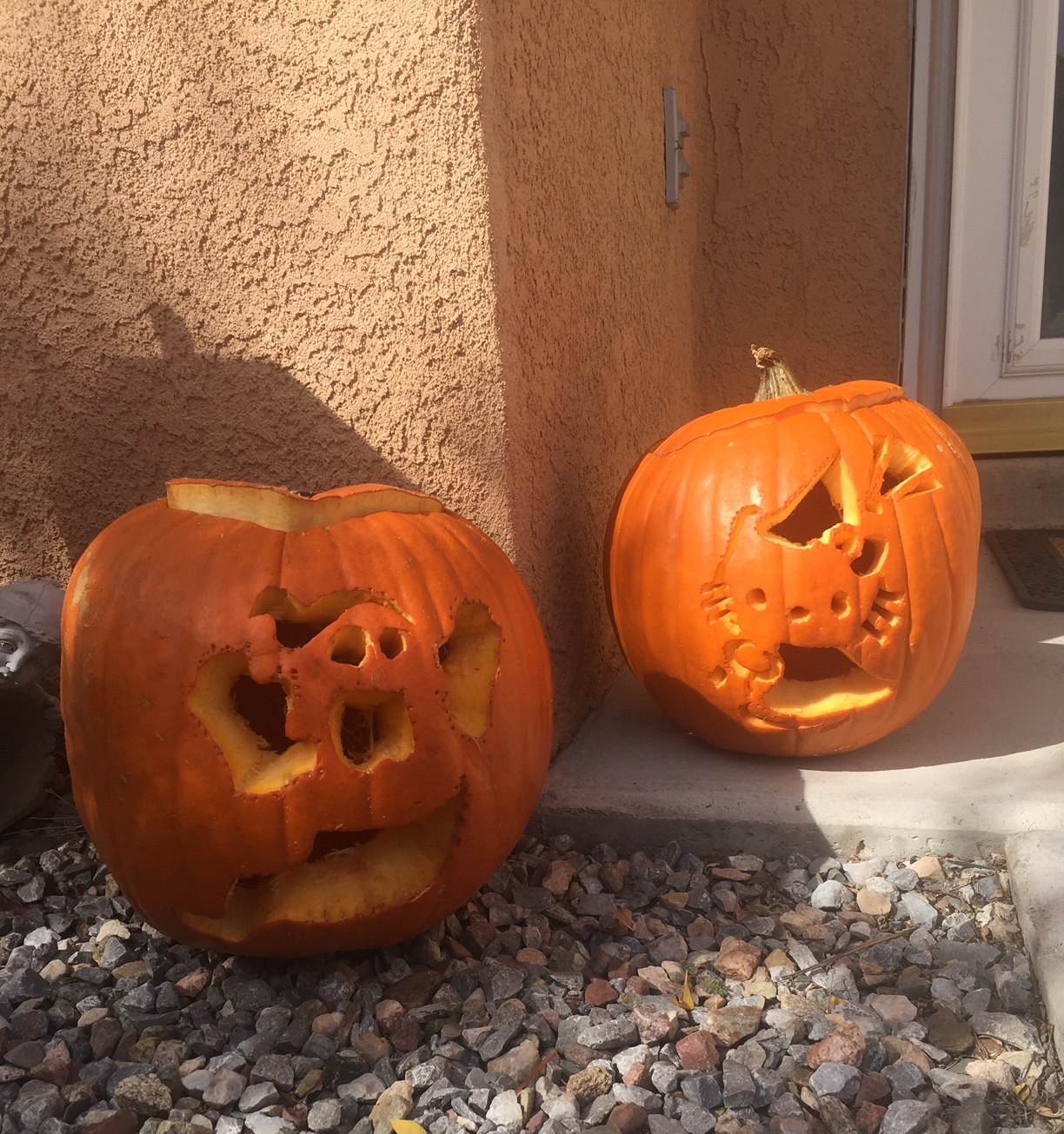 Being that she’s older now, I thought she would take the initiative to complete her own pumpkin no problem, but boy was I mistaken. After about less than 10 minutes in, she was a bit too grossed out getting her hands dirty taking out the pumpkin guts which meant it was up to me to clean both out! I forget sometimes how much of a girly girl she is and hates to get her hands dirty. But once it was time to actually carve them out, she was all about tracing the pattern on the pumpkin and attempting to carve it out.

To add to our fun, I wanted to do a little bit of baking with her but decided otherwise since she was still quite sickly. Normally I am all about taking her sickness from her so she can feel better, but not this go around. Being pregnant, I have been making completely sure that her sick germs die and not spread throughout the house because I cannot be taken down by a stomach bug!! I made sure to Clorox wipe down all her toys and books, cleaned her room, washed her bedding, and cleaned any other surface she touched.

Tis the season for sickness, make sure to stay healthy out there friends and make sure to constantly wash your hands!! I always blame the school for her sickness spills since those places are just breeding grounds for germs.

Be sure to follow me on my other social media pages which I update more regularly than the blog with a bit more personal posts such as this. Adios and talk to you guys next time!!